  1 Write A Review >
Buy Online Where To Buy

When testing for pregnancy you want to be sure of your result. This 8 pregnancy tests value pack includes 3 Early Result Pregnancy Test Sticks and 5 Test Strips to help you test confidently and conveniently.

The first few weeks of pregnancy are critical to fetal development, so early prenatal care is important for a healthy birth weight and the baby's survival. The sooner you know you're pregnant, the sooner you can begin making healthy pregnancy choices for yourself and your baby that include diet, nutrition and limiting your exposure to hazards.

Things to Know About Testing Early

Things to Know About Testing Often

When a woman becomes pregnant, her body produces a hormone called hCG (human Chorionic Gonadotropin). The secretion of this hormone by the developing placenta begins soon after conception and increases throughout the first trimester. The presence of hCG in urine is an excellent indication of pregnancy. FIRST RESPONSE™ Pregnancy Test Strips is a qualitative test for the detection of hCG in urine. With the FIRST RESPONSE™ Pregnancy Test Strips, you can test on the first day of your missed period.

HOW TO USE: EARLY RESULT PREGNANCY TEST


Read full details and instructions before taking test, click here. Then, remove test stick from wrapper and take off the Overcap.

Hold stick by Thumb Grip, with the Absorbent Tip pointed down, and the Result Window facing away from body. Place Absorbent Tip into your urine stream for 5 seconds only. 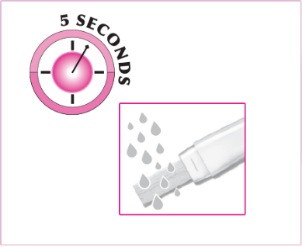 OR Collect urine in a clean, dry cup. Dip the entire Wide Absorbent Tip into urine for 5 seconds only. 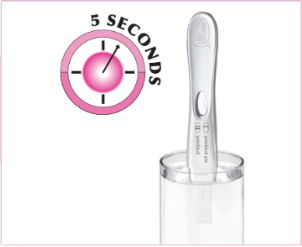 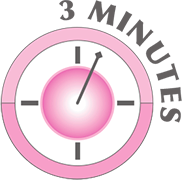 While holding stick with Wide Absorbent Tip pointed down, put Overcap back on. Place stick on a flat, dry surface, Easy Read Result Window facing up.

The pink color moving across the Easy Read Result Window means the test is working.


HOW TO USE: PREGNANCY TEST STRIPS

The EasyRead app instantly converts your pregnancy test results into the words "Pregnant" or "Not Pregnant." Getting twice the certainty* is now as easy as 1,2,3, Confirm. Tell me more!

PREGNANT: Two Pink Lines appear in the Easy Read Result Window. Note: One line may be lighter than the other.

This result shows that the pregnancy hormone (hCG) was detected. Please see your healthcare professional to confirm this result.

NOT PREGNANT: Only One Pink Line appears in the Easy Read Result Window.

CAUTION: Although you may not be pregnant, it could also be too early to tell. For instance, your urine may not have enough of the pregnancy hormone to be detected yet. If you do not get your period within 7 days, retest with another FIRST RESPONSE™ Early Result Pregnancy Test. If you receive another Not Pregnant result and your period still hasn’t started, call your healthcare professional.


HOW TO READ: PREGNANCY TEST STRIPS 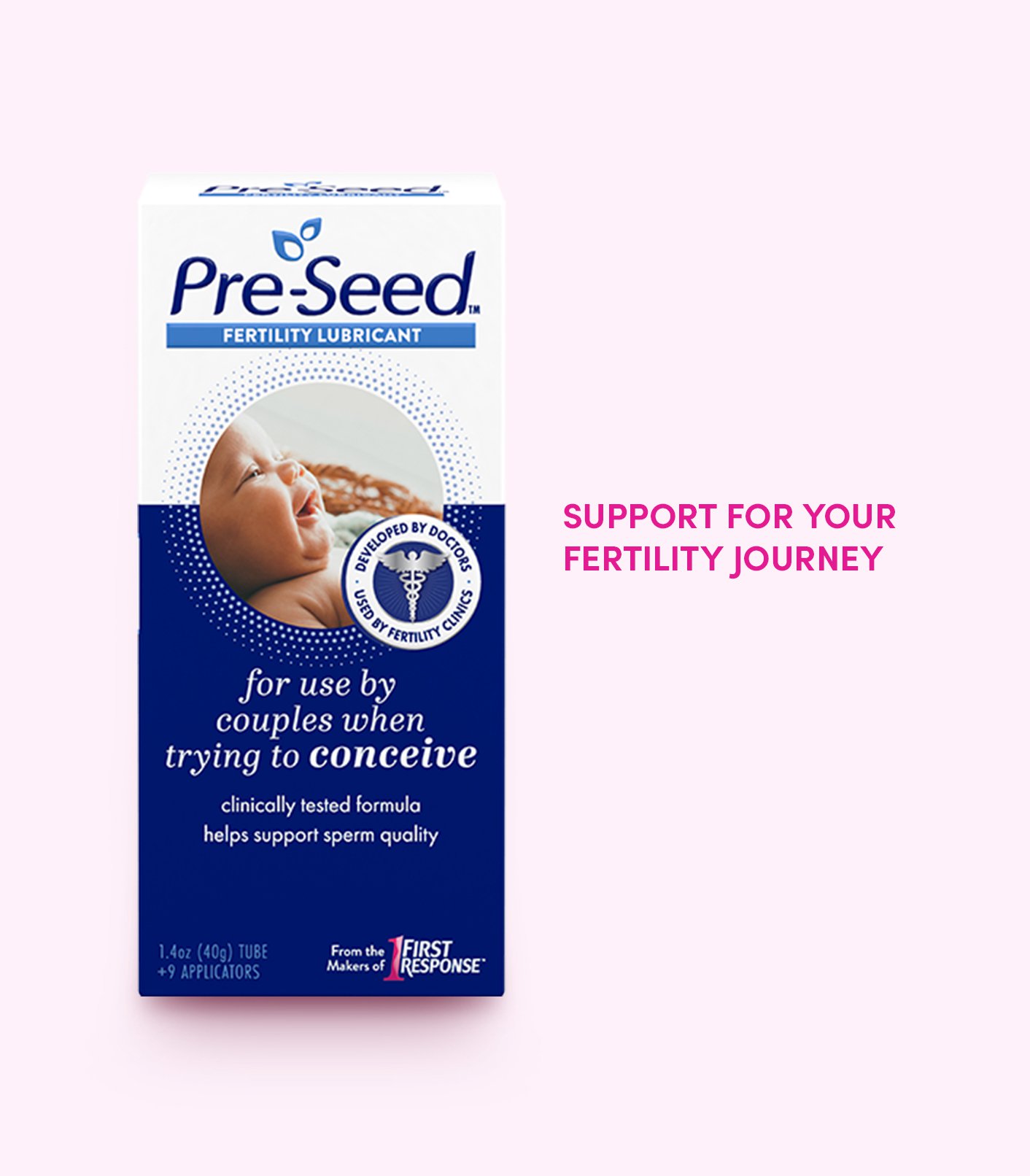 For Use by Couples Trying to Conceive. Designed to be isotonic and pH balanced similar to that of the vaginal environment to aid in supporting sperm survival.

0% of reviewers recommend this product

Do any drugs or medications affect the test?

Only medications containing the pregnancy hormone (hCG) can affect the result (e.g., A.P.L., Pregnyl, Profasi and Pergonal). The test should not be affected by hormone therapies containing: Clomiphene citrate (e.g., Clomid and Serophene); alcohol; painkillers; antibiotics; or the contraceptive pill.

How accurate is the test?

FIRST RESPONSE™ Early Result is >99% accurate from the day of ‘missed’ period. However, some pregnant women may not have detectable amounts of pregnancy hormone in their urine on the day of the test, or may have miscalculated the first day of their period.

How do I use the First Response EasyRead App?

EasyRead app scans your Early Result or Rapid Result test stick results and instantly converts your results into the words “Pregnant” or “Not Pregnant.”
Tell me more!

Your privacy is our top priority! EasyRead does not save your scanned result or associate your information with the results.

How do the FIRST RESPONSE™ Pregnancy Tests work?

The test detects human chorionic gonadotropin (hCG) in urine. hCG is the hormone your body produces during pregnancy.

How does the FIRST RESPONSE™ Early Result Pregnancy Test work?

The test detects human chorionic gonadotropin (hCG) in urine. hCG is the hormone your body produces during pregnancy.

I have waited longer than 3 minutes, and there are still no lines in the Result Window. Is there anything wrong?

Your result should appear within 3 minutes. There should be at least one pink line in the Easy Read Result Window at 3 minutes to indicate that the test is completed and you have done it correctly. If not, the test is invalid. This could be due to insufficient urine on the Wide Absorbent Tip or not holding the device with the Wide Absorbent Tip pointing downward while replacing the Overcap. You should retest with another device, carefully following all directions.

What do I do if the result is negative (not pregnant)?

You may not be pregnant, or it may be too early to tell. If you do not get your period within 7 days, you should retest with another FIRST RESPONSE™ Early Result Pregnancy Test. It is possible that you miscalculated the length of your cycle, or your urine may not have had enough of the pregnancy hormone for the test to give you a positive result. If upon retesting you get another negative result and your period has still not started, you should call your doctor.

What do I do if the result is positive (pregnant)?

A positive (pregnant) test result shows that the pregnancy hormone (hCG) was detected, which normally indicates pregnancy. You must see your doctor to confirm that you are pregnant. If you test positive, but think you may not be pregnant, you should check with your doctor.

When can I test with FIRST RESPONSE™ Early Result Pregnancy Test?

The FIRST RESPONSE™ Early Result Pregnancy Test is designed to detect hCG as early as 6 days before your missed period (5 days before day of the expected period). The amount of pregnancy hormone increases as pregnancy progresses. In laboratory testing with early pregnancy urine samples, FIRST RESPONSE™ gave the following results:

Will the result change if left standing for a certain period of time?

When can I perform the test?

How accurate is the test?

In studies of the FIRST RESPONSE™ Pregnancy Test Strips with urine samples representative of both pregnant and non-pregnant subjects, both laboratory technicians and consumers obtained the correct expected result in more than 99%* of the samples. *>99% accurate at detecting the pregnancy hormone. However, some pregnant women may not have detectable amounts of the pregnancy hormone hCG in their urine on the first day of the missed period or may have miscalculated the first day of their period.

Can any medicines affect the result?

Test results should not be affected by oral contraceptives, painkillers, antibiotics, other common drugs or caffeine. However, fertility drugs may cause an inaccurate result. Medicines that contain hCG (hCG drugs which are given by injections) can give false results.

Can the result change from standing for a certain length of time?

I have waited longer than 5 minutes and still there are no lines in the test area. Is there anything wrong?

If the test result is negative, what do I do?

A negative test result means that no pregnancy hormone has been detected. You may not be pregnant, or it may be too early to tell. If your period does not start within a week, you may have miscalculated the day your period was due. Repeat the test using another pregnancy test strip after 7 days. If the second test still gives you a negative result and you still have not menstruated, you should see your healthcare professional.

If the test result is positive, what do I do?