What Does a Faint Line on a Pregnancy Test Mean? 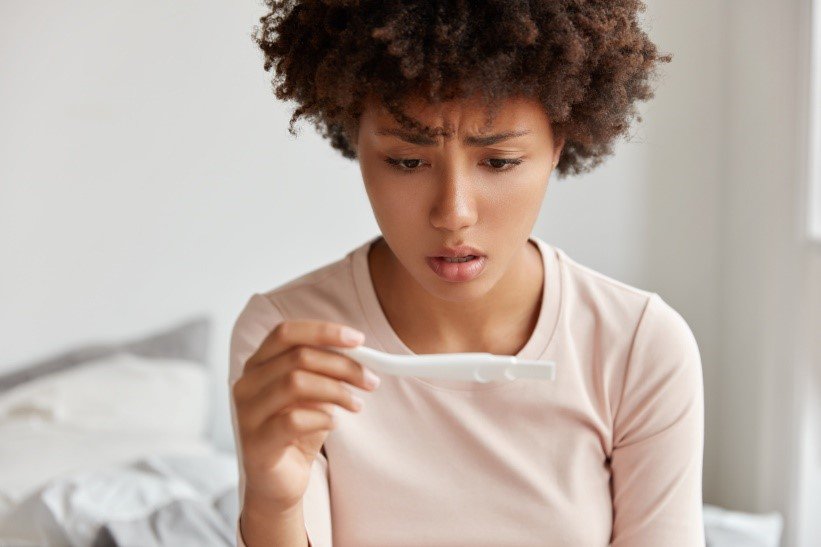 When you take a pregnancy test, the control line shows that the test is working, and the test line shows the results. If a second line appears (pink or blue) – even a faint one – the test has detected the pregnancy hormone in your urine. See your healthcare provider to confirm you are pregnant.

Sometimes people confuse other lines on pregnancy tests for a positive result. The important thing to look for is a second line that develops color. A shadowy, shiny, colorless mark on a pregnancy test is not a positive. If you’re ever unsure of your pregnancy test result, repeat using another test, or see your doctor.

How Does a Pregnancy Test Work?

For a quick primer, at-home pregnancy tests check your urine for Human Chorionic Gonadotropin hormone, or hCG, which ramps up quickly in your body after fertilization. The lines on a pregnancy test develop color if hCG is detected.

An at-home First Response™ pregnancy test works like this:

Some tests, like First Response™ Early Result Pregnancy Tests, are very sensitive and can detect lower levels of hCG so you can test as early as 6 days sooner.*

What is a Control Line on a Pregnancy Test?

The control line lets you know the test is working correctly. Every non-digital pregnancy test has two lines that are either parallel to each other or form a plus sign. The control line is not a positive result.

If a control line does not appear after exposing the test to urine, the test is not working properly. You should dispose of the pregnancy test and use another one.

What is the Test Line on a Pregnancy Test?

The test line is the line that appears on an at-home pregnancy test if hCG is detected in your urine. If this line does not change color – turning pink for First Response™ – then the test did not detect hCG and you are most likely not pregnant.

In many cases, when you are using a First Response™ test, the test line may be a fainter pink than the control line, which is sometimes quite dark. A test line can be faint pink if your urine is diluted or it’s very early in your pregnancy. Not-to-worry, though. Even a faintly pink-colored test line indicates a positive result. Simply put, if there is color on the test line, it’s time to check in with your doctor to confirm a pregnancy.

I’m Still Not Sure if it’s a Faint Positive

Follow these tips for what to do if you’re unsure about your pregnancy test result:

When it comes to your pregnancy test results, you want to know for sure. That’s why we created the First Response™ Easy Read App. Download the app to your phone and scan your First Response™ Early Result or Rapid Result test results. The app will interpret the test lines for you and display the words “Pregnant” or “Not Pregnant.”

With the Easy Read App, you won’t be left wondering, “is it a faint positive?” Scan your tests results and get the comfort of certainty.

And as always, visit your doctor for confirmation if you suspect a pregnancy test may be positive.

* FIRST RESPONSE™ detects the pregnancy hormone 6 days sooner than the day of your missed period (5 days before the day of expected period). In laboratory testing, First Response Early Result Pregnancy Test detected the pregnancy hormone levels in 76% of pregnant women 5 days before their expected period. See package for details about testing early.