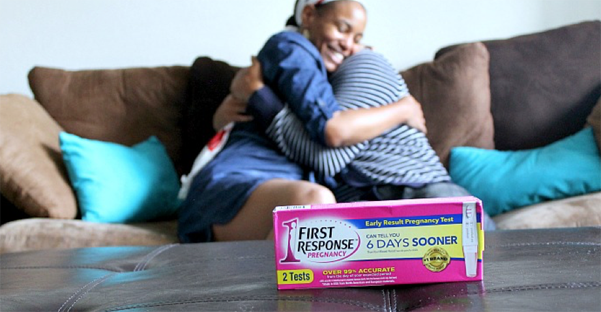 Some of the most anxiety inducing moments in my life have been when I was taking a pregnancy test. Both when I had been trying to conceive, and that time that it turned out ot be a surprise. Waiting for those two little lines to appear, for me, was always both stressful and exciting.

When I became pregnant with my son, I had a feeling that I was expecting.
My period was a day late and that wasn’t normal for me. I knew that taking a pregnancy test so soon after my missed period might give me an incorrect result, but I didn’t let that stop me. I went to the drug store, and looked for a test that promised to let me know as soon as possible.

The very first time I was pregnant, I didn’t know right away. I took a test that didn’t seem clear, and I had to wait to get an appointment with my doctor to confirm. I didn’t want to take that chance this go round. Since I was already two days late, I was looking for accuracy and I needed to know if I was pregnant RIGHT NOW. When I saw the FIRST RESPONSE™ Early Result Pregnancy Test, the shelf in the drugstore with that big “6 days sooner than your missed period” on it, I couldn’t snatch it up quick enough.

I had taken a lot of pregnancy tests, so I knew that I was supposed to use the first urine of the morning. Every book I had read prior said that the first morning urine was the best for detecting pregnancy hormones. However, when I opened the test and pulled out the instructions, I noticed it said I didn’t have to wait. It was like all my prayers were answered! I remember being so happy to read that because I was beyond anxious! After all of that time, had it finally happened? My heart was beating so fast as I pulled one of the two test sticks out of the box. Was I really pregnant?

I didn’t have to wait long to find out. I knew that the test window would show one line if I wasn’t pregnant and two if I was. I took the test and prepared to wait, praying that I’d see double.

The lines came out immediately, and I nearly dropped it on the floor because I was so excited! After all of those months of trying, all those months of waiting and hoping, in just a few seconds, the wait was over! I took the other test just to be sure, and once again, the results were clear within seconds. In that one moment, I knew that my life and my family would be changed forever and I couldn’t have been more thrilled!

Of course, then a new wait began, but nine months later it was totally worth it.